Wally and the Holiday Jailbreak

Wally and the Holiday Jailbreak

hat if you could gift someone the meaning of life? That is Wally Palmer’s hope this Christmas. Third grader Wally lives alone with his father, an ill professor struggling with depression and unable to summon much holiday spirit. When his father reveals that the source of his sadness is not knowing the meaning of life, Wally becomes determined to find it for him.

In this holiday comedy, Wally and his best friend, Sarah, embark on a quest to find the meaning of life over their school’s winter break. They’ll face Wally’s greatest fear, dogs; Sarah’s cunning little sister; and worst of all…cops.

Wally will do anything to see his father happy this Christmas, but will his determination be enough?

Content warning: While Wally and the Holiday Jailbreak is told through the eyes of a third grader, it is an adult comedy that includes mature content. Parental discretion is advised. 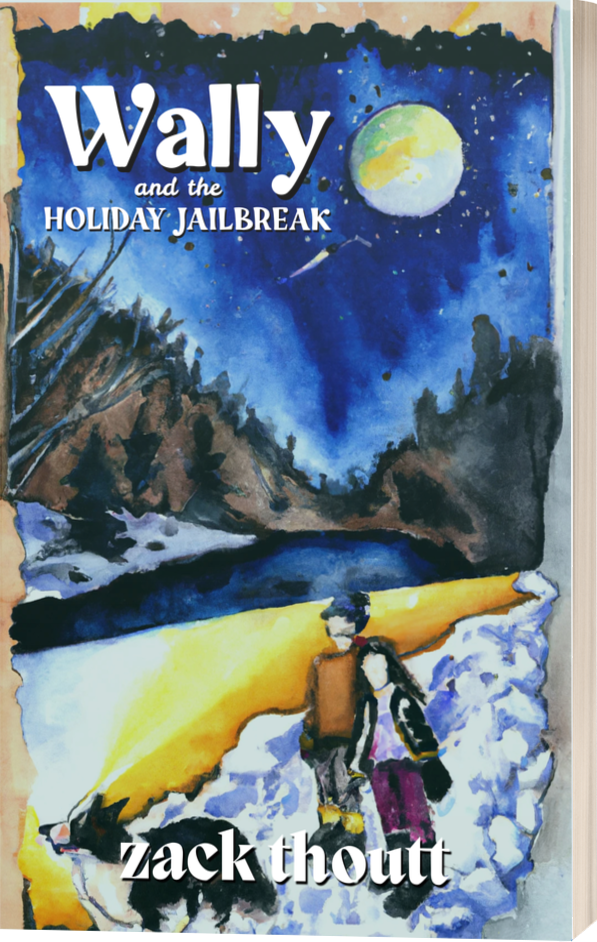 ally and the Holiday Jailbreak is a holiday comedy that was published on December 12th, 2022.

The first five chapters are available here on my website for free. When you're ready for the full book, it is sold on Amazon in eBook, paperback, and hardcover formats. The title is also free with Kindle Unlimited.

The audiobook has been published through several dozen distributors (including Audible), but is still in quality control and not yet available for purchase. I will send out a message when the audiobook can be purchased, which should be any day.

If you'd like to stay up-to-date with Wally and my other writing, you can sign up for my newsletter and reader group, The Storied Scrolls.

Chapter 1 of Wally and the Holiday Jailbreak

Three successive chimes rang over the Bear Creek Elementary School intercom like bells in the school Christmas choir. Two of Wally’s classmates sprang to their feet and ran toward their backpacks, but Wally knew better. He glanced at his best friend, Sarah Evans, who was sitting on the edge of her red plastic seat with her elbows resting on her desk.

Chapter 2 of Wally and the Holiday Jailbreak

Wally sat on a plastic chair hugging his backpack as Mrs. Brenda told Principal Anderson all the bad things he’d done. He didn’t want to look at either of them, so he rested the right side of his face on the top of his backpack and thought about what he could get his father for Christmas.

Chapter 3 of Wally and the Holiday Jailbreak

Sarah’s dog, Bee Bee, was sitting in Wally’s seat when he opened the door to Mr. Evans’s yellow Subaru. Bee Bee was a shaggy Bernese mountain dog with a head twice the size of Wally’s. A small puddle of drool had pooled on the seat under her mouth. Bee Bee moved her head toward Wally and licked the air in his direction, but he recoiled.

Chapter 4 of Wally and the Holiday Jailbreak

Wally saw Sarah’s blue house around the corner as they coasted down Northstar Court. They used to live close enough for Wally to ride his bike to their house, but moved at the start of the school year. Mr. Evans made Wally memorize their new address: 135 Northstar Court, Boulder, Colorado. He told Wally if anything ever happened to his dad, he should tell somebody to take him to their house.

Chapter 5 of Wally and the Holiday Jailbreak

Wally turned the page of The Boxcar Children: Mystery Ranch and continued reading, “‘Boy, look at that car!’ said Benny, looking out the wa…window,” Wally stuttered, sounding out the word. “It was long and low. It was pa…pa…painted yellow and black. A man got out of the car. A goo… a goo-ard?”